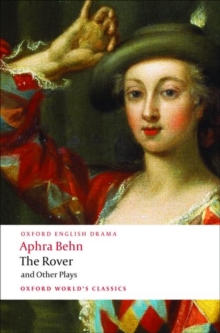 The Rover and Other Plays Paperback / softback

Aphra Behn (1640-89) was both successful and controversial in her own lifetime; her achievements are now recognized less equivocally and her plays, often revived, demonstrate wit, compassion and remarkable range. This edition brings together her most important comedies in a single volume: The Rover, her best-known play; The Feigned Courtesans, a lively comedy of intrigue; The Lucky Chance, a comedy with a bitter edge, which takes a satirical look at marriage customs; and the dazzling and popular farce, The Emperor of the Moon. Under the General Editorship of Michael Cordner of the University of York, the plays have been newly edited and are presented with modernized spelling and punctuation.

Detailed annotation helps the reader to visualize the plays in performance and the Introduction argues for the importance of Behn's skilful stagecraft and her great success as an entertainer.

Oroonoko, the Rover and Other Works
Aphra Behn
£2.99