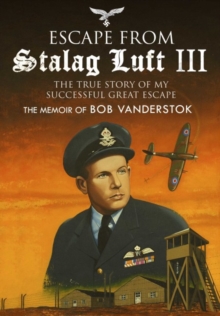 A born raconteur, his escapes, his operations as a Spitfire pilot, his experiences as a prisoner-of-war, and his incredible escape crossing the Pyrenees - all are described in a breathtaking manner which made me read his book through in one sitting.' Prof Dr L de Jong, Founder/Director of the Dutch Institute for War Documentation'Such a modest man, such a dramatic story - you'll be pulled into this absorbing account.' Jonathan Vance, The True Story of the Great Escape"Quickly, I climbed up to the surface and immediately found the rope . . . I felt no signal, so it was not safe yet. Then I felt three distinct tugs and slowly popped my head up.

The nearest 'Goonbox' was at least 200 feet away; but, indeed, I was twenty feet from the edge of the woods." Bram VanderstokOn the night of 24 March 1944, Bram (Bob) Vanderstok was number 18 of 76 men who crawled beyond the barbed wire fence of Stalag Luft III in Zagan, Poland.

The 1963 film The Great Escape, made this breakout the most famous of the Second World War: this is the true story of one of only three successful escapees. Vanderstok's memoir sets down his wartime adventures before being incarcerated in Stalag Luft III and then in extraordinary detail describes various escape attempts, which culminated with the famous March breakout.

After escaping, Vanderstok roamed Europe for weeks, passing through Leipzig, Utrecht, Brussels, Paris, Dijon and Madrid, before making it back to England.

He reported to the Air Ministry and three and a half months after escaping, on 30 May 1944, he returned to the British no.91 Squadron.

In the following months he flew almost every day to France escorting bombers and knocking down V1 rockets. In August 1944 he finally returned to his home. He learned that his two brothers had been killed in concentration camps after being arrested for resistance work.

His father had been tortured and blinded by the Gestapo during interrogation.

He had never betrayed his son.