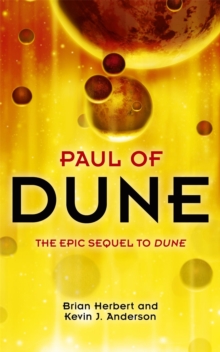 Between the end of Frank Herbert's Dune and his next novel Dune Messiah lies a mystery: how a hero adored by a planet became a tyrant hated by a universe.

Paul of Dune begins the story of those twelve fateful years and the wars of the jihad of Paul Muad'Dib.

It is an epic of battle and betrayal; of love and idealism; of ambition and intrigue.

Above all, it is the story of how Paul Atreides - who achieved absolute power when scarcely more than a boy - changes from an idealist into a dictator who is the prisoner of the bureaucrats and fanatics who surround him.

Have you read Dune? And have you read Brian Herbert and Kevin J. Anderson's novels continuing the story? The latest are Hunters of Dune and Sandworms of Dune.