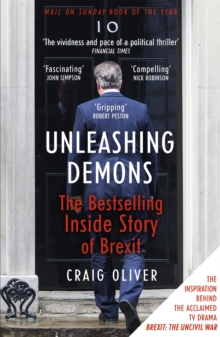 MAIL ON SUNDAY BOOK OF THE YEAR OBSERVER BOOK OF THE WEEK'A compelling book' Evening Standard 'Essential' Sunday Times 'His soldier's dispatch is easy to read and vividly illustrates a sense of rising panic and embattlement.

If you want to know what it was like to be there at the time, in the eye of a frenzied storm, then [Unleashing Demons] should be bought...' Andrew Marr, Sunday Times 'Vivid and immediate...It paints a brutally honest portrait of the British political class' Mail on Sunday 'A must-read account of history as it happened' Matt D'Ancona 'Jauntily written...naughty fun' Quentin Letts 'Unleashing Demons...has the vividness and pace of a political thriller.

Extraordinarily candid...' Financial Times 'A fascinating book' Robert Elms, BBC 'The book that will set Westminster ablaze' Mail on Sunday 'Gripping reading' New Statesman 'Utterly fascinating...indispensable to appreciating this extraordinary phase in our history.' John Simpson 'The compelling insider's account' Nick Robinson 'This is one of the most vivid, frank and exciting inside accounts to have been written for years.' Anthony Seldon 'A gripping fly-on-the-wall account.' Robert Peston As David Cameron's director of Politics and communications, Craig Oliver was in the room at every key moment during the EU referendum - the biggest political event in the UK since World War 2. Craig Oliver worked with all the players, including David Cameron, George Osbourne, Barack Obama, Angela Merkel, Jeremy Corbyn, Boris Johnson, Michael Gove, Theresa May and Peter Mandelson. Unleashing Demons is based on his extensive notes, detailing everything from the decision to call a referendum, to the subsequent civil war in the Conservative Party and the aftermath of the shocking result. This is raw history at its very best, packed with enthralling detail and colourful anecdotes from behind the closed doors of the campaign that changed British history.