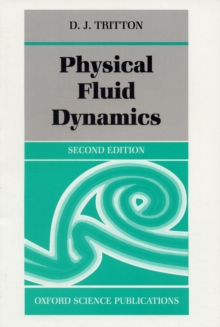 The author here presents the dynamics of incompressible flow from the viewpoint of the physicist for the benefit of students and others in a variety of disciplines who need to understand fluid motion. The book will be of value to a wide range of readers, including those in the Earth sciences, physicists, engineers, and applied mathematicians. In this new edition much of the material is new or rewritten but the purpose and style of the first edition are retained.

Particular emphasis is given to information obtained by experiment and observation, in addition to analysis of the equations of motion, the book's primary concern is to convey fundamental understanding of the behaviour of fluids in motion. Special features include an introductory non-mathematical treatment of three particular flow configurations: extensive consideration of topics of geophysical importance: an unusually detailed coverage of topics of which our knowledge comes primarily from experimental data; numerous photographs to illustrate the phenomena discussed; and a concluding chapter which demonstrates, by descriptions and photographs of a variety of examples, the wide applicability of fluid mechanics. New topics in this second edition include double diffusive convection and modern ideas about dynamical chaos - mainly but not only in relation to transition to turbulence. The discussion of instabilities has been restructured and the treatments of separation and of convection in horizontal layers much extended.