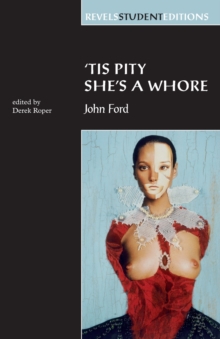 John Ford's tragedy, first printed in 1633, is the first major English play to take as its theme a subject still rarely handled: fulfilled incest between brother and sister.

It is one of the most studied and performed of all plays of the period, and has been successfully adapted for film and radio.

The Revels plays edition by Derek Roper has been the standard scholarly edition since it appeared in 1975.

This new edition uses the same authoritative text, but with notes designed for modern undergraduate use.

The substantial introduction has been completely rewritten to take account of the studies and new approaches of the last twenty years.

It presents the play as an 'interrogative text', in which subversive meanings are inscribed within an apparently orthodox narrative; as a courageous treatment of forbidden love; and as an achieved work of Baroque art. -- .