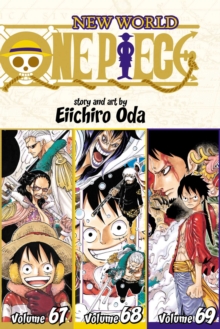 Part of the One Piece (Omnibus Edition) series

Join Monkey D. Luffy and his swashbuckling crew in their search for the ultimate treasure, the One Piece. As a child, Monkey D. Luffy dreamed of becoming King of the Pirates. But his life changed when he accidentally ate the Gum-Gum Fruit, an enchanted Devil Fruit that gave him the ability to stretch like rubber.

Its only drawback? He'll never be able to swim again--a serious handicap for an aspiring sea dog!

Years later, Luffy sets off on his quest to find the "One Piece," said to be the greatest treasure in the world... Now that they've reached the New World, the Straw Hat pirates are up against things they've never seen before-dragons, deranged detached limbs and the deadly island geography of Punk Hazard!

When Luffy and his friends witness the bizarre scientific antics of Dr. Vegapunk and his acolytes, the Devil-Fruit action's really a gas!

This best-selling manga of high seas adventures just got bigger with this 3-in-1 collection!