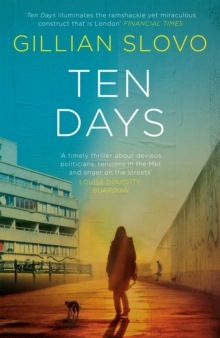 It's 4 a.m. and Cathy Mason is watching dawn break over the Lovelace estate.

By the end of the day, her community will be a crime scene.

By the end of the week, her city will be on fire. In this gripping thriller, a death at police hands has repercussions far beyond one family plunged into grief.

When violence grips Cathy's estate, the dead man becomes a useful tactic (or an urgent threat) in political games at the highest level.

So while lives are at risk on Cathy Mason's estate, across London in Westminster, careers are being made, or ruined.

From a Home Secretary's attempts to unseat a Prime Minister, to a new Met Police Commissioner fighting for his job, to families torn apart, Ten Days shows what happens when politics, policing and the hard realities of living in London explosively collide.