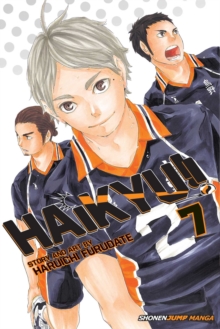 Part of the Haikyu!! series

Shoyo Hinata is out to prove that in volleyball you don't need to be tall to fly!

Ever since he saw the legendary player known as "the Little Giant" compete at the national volleyball finals, Shoyo Hinata has been aiming to be the best volleyball player ever!

He decides to join the team at the high school the Little Giant went to-and then surpass him.

Who says you need to be tall to play volleyball when you can jump higher than anyone else?

The Inter-High match between Karasuno and Aoba Johsai continues.

Star setter Tohru Oikawa has figured out the secret behind Kageyama and Hinata's quick sets and has them on the ropes!

When Kageyama loses his cool, he ends up getting benched and is subbed out by none other than third year Koushi Sugawara!

Will Karasuno's new approach be enough for them to seize control of the game and win?