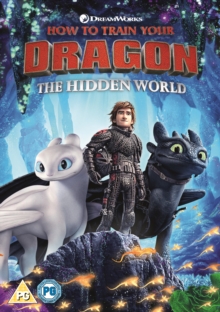 How to Train Your Dragon - The Hidden World DVD

Animated comedy adventure sequel based on the children's novel by Cressida Cowell.

Now ruling over Berk as village chief, Hiccup (voice of Jay Baruchel) has allowed for dragons and humans to happily co-exist in the same land, but things take a strange turn when the enigmatic female white dragon Light Fury captures Toothless's attention.

As he clumsily sets out to impress her with the hope of becoming her mate, their budding romance is soon quashed by the arrival of a ruthless enemy who intends to invade Berk and capture all of the dragons.

To save the fate of their kingdom and get the dragons to safety, Hiccup and Toothless venture out to the mythical Hidden World which dragons call home and where they may be able to summon their own army against the evil tyrants who threaten their new way of living.