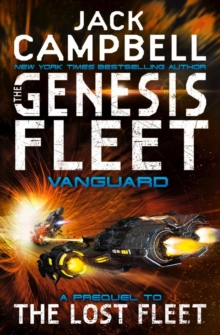 Part of the The Genesis Fleet series

Earth is no longer the centre of the universe. After the invention of the faster-than-light jump drive, humanity is rapidly establishing new colonies.

But the vast distances of space mean that the protection of Earth's laws no longer exists.

When a nearby world attacks, the new colony of Glenlyon turns to Robert Geary, a former junior fleet officer, and Mele Darcy, once an enlisted Marine.

They must face down warships with nothing but improvised weapons and a few volunteers - or die trying.The only hope for lasting peace lies with Carmen Ochoa, a "Red" from anarchic Mars, and Lochan Nakamura, a failed politician, and their plan for a mutual alliance.

But if their efforts don't succeed, space could become a battlefield between the first interstellar empires...