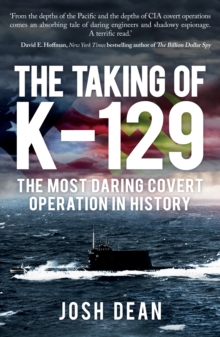 The Taking of K-129 : The Most Daring Covert Operation in History Paperback / softback

In late February, 1968, a Russian submarine, holding a battery of three ballistic missiles with enough nuclear material to create an explosion 50 times greater than Hiroshima, disappeared in the Pacific Ocean.

The Soviet Navy used ships, subs and planes in an enormous search of open ocean, in stormy seas, where the depth ranged up to 18,000 feet.

But they were looking in the wrong place. The US Navy, meanwhile, had been watching. Intelligence officials knew the sub had been lost and they began a secret operation to find it first.

But once they found it, they somehow needed to retrieve it from the ocean floor.

The CIA enrolled reclusive billionaire Howard Hughes and commissioned the most expensive ship ever built, a technological marvel that the public was told was to mine rare minerals from the ocean floor. So began an incredible top-secret operation that took six years, and would become the largest and most expensive covert operation in history.

Its name: Project Azorian. Its objective: the taking of submarine K-129.