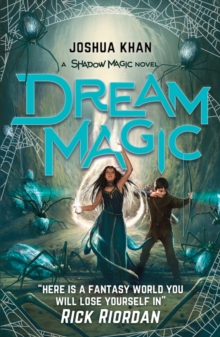 Part of the Shadow Magic series

In a world ruled by six ancient Houses of Magic, a girl and a boy begin an epic and dangerous journey of discovery . . . Lilith Shadow, princess of darkness, is struggling with her growing powers.

Castle Gloom is filling with ghosts, zombies roam the country and people throughout Gehenna are disappearing.

Then Lily is attacked in her own castle by a mysterious sorcerer known as Dreamweaver and his army of jewel-spiders whose bites send victims to sleep.

Thorn, and his giant bat Hades, must save Lily from the realm of sleep and help her overcome the evil Dreamweaver in order for her to reclaim her kingdom.