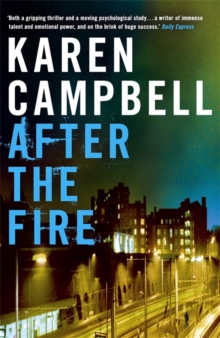 After the Fire Paperback / softback

PERFECT FOR FANS OF SUSIE STEINER Someone is dead because of Jamie.

Yesterday they were alive. Jamie Worth is a newly qualified as a firearms officer and is called to a domestic disturbance.

Events get out of hand, and he shoots and kills a teenaged girl who appears to have been unarmed.

Already wracked with guilt, he is horrified when, with the media baying for blood, he is accused of murder.

How can a police officer survive in prison when he suddenly finds himself on the wrong side of the law? And how can his wife Cath and ex Anna come to terms with what has happened?

From the author of THE TWILIGHT TIME, AFTER THE FIRE is a chilling glimpse of the flipside of life as a law enforcer, written in 'stiletto-sharp prose' (The Herald) by one of the most exciting new voices in crime fiction. Praise for Karen Campbell 'Gritty as all hell, shot through with black humour and with enough pace and atmosphere to give the likes of Denise Mina a run for their money.

All this and the chutzpah to create a seedy and unpleasant superintendent named Rankin!' font size="+1">Mark Billingham 'The plot is wonderful, the characterisation of a family in crisis is both sharp and sympathetic, and the author does not shy away from examining the less palatable aspects of relations between the police and the public' Guardian 'I loved it . . . Anna is a great, original character and Karen Campbell has a great way with images' Kate Atkinson 'Karen Campbell deserves to be admitted to membership of what's becoming a very large club - Scottish crime writers of excellence . . . As to be expected from a former police officer, Campbell portrays her milieu with harsh authenticity, and Anna Cameron is wholly believable in her unheroic role.

Glasgow and its citizens are described with vivid passion' The Times

After the Fire
Karen Campbell
£3.99