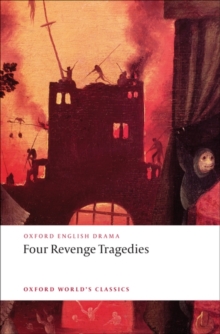 The Revenge Tragedy flourished in Britain in the late sixteenth and early seventeenth centuries. Thomas Kyd's The Spanish Tragedy helped to establish the popularity of the genre, and it was followed by The Revenger's Tragedy, published anonymously and ascribed first to Cyril Tourneur and then to Thomas Middleton. George Chapman's The Revenge of Bussy D'Ambois and Tourneur's The Atheist's Tragedy appeared soon after. Each of the four plays printed here defines the problems of the revenge genre, often by exploiting its conventions in unexpected directions. All deal with fundamental moral questions about the meaning of justice and the lengths to which victimized individuals may go to obtain it, while registering the strains of life in a rigid but increasingly fragile social hierarchy. Under the General Editoriship of Dr Michael Cordner, of the University of York, the texts of the plays have been newly edited and are presented with modernized spelling and punctuation. In addition, there is a scholarly introduction and detailed annotation.