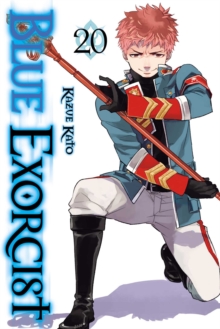 Part of the Blue Exorcist series

Rin and his exorcist classmates are caught in a secret war against the forces of darkness. Raised by Father Fujimoto, a famous exorcist, Rin Okumura never knew his real father.

One day a fateful argument with Father Fujimoto forces Rin to face a terrible truth - the blood of the demon lord Satan runs in Rin's veins!

Rin swears to defeat Satan, but doing that means entering the mysterious True Cross Academy and becoming an exorcist himself. The holiday season falls upon True Cross Academy, and Rin and his friends kick things off with a combined birthday and Christmas party.

More happy news comes as they are invited to Kyoto for the New Year's wedding of Shima's older brother.

But underneath the festivities runs a feeling of great uneasiness-tension grows between Yukio and Rin as they question the truth of the circumstances of their birth and who their mother really was.

Elsewhere, Lightning continues to press the suspects of his investigation of the Illuminati.

Sooner or later, something's got to give...

Also in the Blue Exorcist series