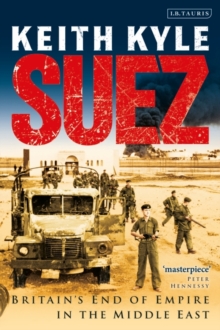 This title includes a new Foreword by WM. Roger Louis. On 26 July 1956, the British Empire received a blow from which it would never recover.

On this day, Egypt's President Gamal Abdul Nasser nationalized the Suez Canal Company, one of the gems of Britain's imperial portfolio.

It was to be a fateful day for Britain as a world power.

Britain, France and Israel subsequently colluded in attacking Egypt, ostensibly - in the case of Britain and France - to protect the Suez Canal but in reality in an attempt to depose Nasser.

The US opposition to this scheme forced an ignominious withdrawal, leaving Nasser triumphant and marking a decisive end to Britain's imperial era.

In this, the seminal work on the Suez Crisis, Keith Kyle draws on a wealth of documentary evidence to tell this fascinating political, military and diplomatic story.

Including new introductory material, this revised edition of a classic work will be essential reading for anyone interested in the history of the twentieth century, military history and the end of empire.