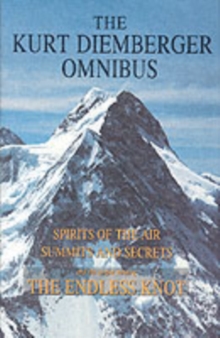 The Kurt Diemberger Omnibus : Spirits of the Air, Summits and Secrets, and The Endless Knot Hardback

Kurt Diemberger is a the only person alive to have made first ascents on two 8,000-metre peaks - Dhaulagiri and Broad Peak - and he is recognised as one of the finest chroniclers of his contemporary mountaineering scene.

His books have popular around the world and his writing is guaranteed to enlighten, move and entertain.

As a fantastic mountaineer and career expeditioner, and a skilled filmmaker and writer, he has been a witness to 50 years of eventful alpinism and Himalayan climbing.

He gives us a link to the golden age when the 8000-metre peaks were first climbed - in the 1950s and early 60s. The Kurt Diemberger Omnibus brings together three fine books, one of which, The Endless Knot, is perhaps the most gripping and tragic mountaineering saga ever written.

It describes the ill-starred K2 attempts of 1986 during which 13 climbers died in a variety of incidents.

At the end of the season seven climbers made one last bid to gain the summit, five succeeded but, overtaken by a storm during the descent, only two of the seven climbers survived.

One of them was Diemberger, who describes events with harrowing candour. Summits and Secrets deals with Diemberger's early climbs in the Alps, the Hindu Kush and the Himalaya.

It describes the epoch-making first ascent of Broad Peak in 1957 and the equally significant first ascent of Dhaulagiri in 1960, where he reached the summit with a Swiss team.

The final book is the more relaxed Spirits of the Air, where Diemberger reflects on his varying - and often hilarious adventures - and on the contrasts between his life in Italy, Austria and the always-beckoning Himalaya.