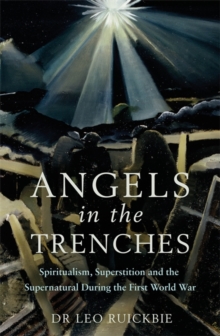 Angels in the Trenches : Spiritualism, Superstition and the Supernatural during the First World War Paperback / softback

After a miraculous escape from the German military juggernaut in the small Belgian town of Mons in 1914, the first major battle that the British Expeditionary Force would face in the First World War, the British really believed that they were on the side of the angels.

Indeed, after 1916, the number of spiritualist societies in the United Kingdom almost doubled, from 158 to 309.

As Arthur Conan Doyle explained, 'The deaths occurring in almost every family in the land brought a sudden and concentrated interest in the life after death.

People not only asked the question, "If a man die, shall he live again?" but they eagerly sought to know if communication was possible with the dear ones they had lost.' From the Angel of Mons to the popular boom in spiritualism as the horrors of industrialised warfare reaped their terrible harvest, the paranormal - and its use in propaganda - was one of the key aspects of the First World War.

Angels in the Trenches takes us from defining moments, such as the Angel of Mons on the Front Line, to spirit communication on the Home Front, often involving the great and the good of the period, such as aristocrat Dame Edith Lyttelton, founder of the War Refugees Committee, and the physicist Sir Oliver Lodge, Principal of Birmingham University.

We see here people at every level of society struggling to come to terms with the ferocity and terror of the war, and their own losses: soldiers looking for miracles on the battlefield; parents searching for lost sons in the seance room.

It is a human story of people forced to look beyond the apparent certainties of the everyday - and this book follows them on that journey.