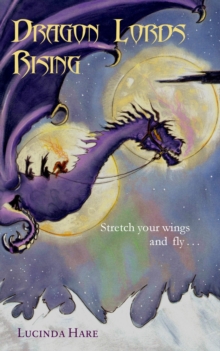 Part of the Dragonsdome Chronicles series

Picking up where Flight to Dragon Isle left off, we once again join the wonderfully named Quenelda and her troop (a battle dragon, a chubby dragon, a boy, a gnome and a dwarf) on her quest to rescue her father, Earl Rufus DeWinter.

Don't worry if any of this sounds unfamiliar. Hare includes a handy who's who at the beginning of the book that means if this is your first time in Dragon Isle, you won't be lost.

New and existing fans will love the places Dragon Lords Rising takes them.

You'll be able to see your reflection in the floors of the Stone Citadel and wish you could slide down the theme-park-like tunnel that leads to the Ice Bears underground world.

One of the best things about Hare's series (and this book) is that there's something for everyone in it.

For the fearless, there are plenty of scrapes and adventures to be had as the troop navigate battle-dragon Stormcracker on their quest.

If you prefer tiaras over tunnels, then there's the oh-I-wish-it-were-real 'Foresight and Hindsight's Exclusive Emporium' (the one-stop-shop for Dragonsdome's upcoming royal wedding).

Anyone who has read the first two books will be glad to know that time is still divided up into amazingly named segments (such as 'at the hour of the dozy hedgehog') and that characters still shout, 'Newt and Toad!' when surprised.

This time round, though, the story is darker and there's a moment or two (I won't tell you which ones!) that'll bring a tear to your eye.

I can tell you no more except strap yourself in when riding Stormcracker and keep Two Gulps Too Many away from those honey tablets...

This Dragon Lords Rising book review was written by Liz Wride Praise for The Dragon Whisperer and Flight to Dragon Isle. One of the most captivating new books to be published for 8+ for some time . . . It made me laugh, cry and remember exactly what's so special about the time when you or your child live in hope of finding a dragon of your own (Amanda Craig The Sunday Times ) The one letdown of Hare's work, is that, in marketing it towards children, adults might see it as 'just another children's book' and pass it over.

The back cover boasts a '9+' age rating and I urge anyone nine or over to snap this read up.

Verdict? A battle-dragon of a book! (Liz Wride, Fantasy Book Review) What Harry Potter did for tales of wizardry, this book does for tales of dragons (Chicklish ) Recommended for Fans Of...: The Lord of the Rings.