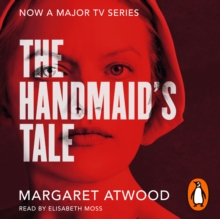 Click hereto see our help pages on reading this eBook on your chosen device. Please note that this eBook is incompatible with Kindle eReaders. Don't forget you'll need Adobe Digital Editions, if you don't already have it.

Brought to you by Penguin. Shortlisted for Audiobook of the Year at the British Book Awards 2020. READ BY ELISABETH MOSS, STAR OF THE HIT CHANNEL 4 TV SERIES The Republic of Gilead offers Offred only one function: to breed.

If she deviates, she will, like dissenters, be hanged at the wall or sent out to die slowly of radiation sickness.

But even a repressive state cannot obliterate desire - neither Offred's nor that of the two men on which her future hangs. Brilliantly conceived and executed, this powerful evocation of twenty-first century America gives full rein to Margaret Atwood's devastating irony, wit and astute perception. 'Moss embodies the lead character, Offred, perfectly and reads with grace and at an ideal pace.' Daily MailPerhaps we could include The Times review of The Handmaid's too: 'This beautifully produced audiobook version of Margaret Atwood's dystopian novel The Handmaid's Tale will whet appetites for its long-awaited sequel, The Testaments, released in September [...] The several narrators match the powerful heft of Atwood's elegant, economical prose.' The Times(c) 1985, Margaret Atwood (P) 2019 Penguin Audio