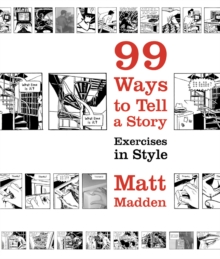 99 Ways to Tell a Story : Exercises in Style Paperback / softback

A series of engrossing one page comics that tells the same story ninety nine different ways Matt Madden's 99 Ways to Tell a Story is a series of one-page comics that tell the same story in a variety of waysInspired by Raymond Queneau's 1947 work of the same title, which told a simple story in ninety-nine different styles and genres - haiku, sonnet, book jacket blurb - Madden does the same but in different styles of comics - Marvel superhero, R.

Crumb, Herge, even as a map or the Bayeux Tapestry. Or he uses varying points of view, visual and verbal parodies, even radical reshuffling of the elements of the story.

The result is funny, inspiring, and genuinely clever. 'Delightful, intriguing and compelling. 99 Ways to Tell a Story is a zany masterpiece that reads like a convergence of Robert Louis Stevenson, Italo Calvino and Action Comics' Harry Mathews