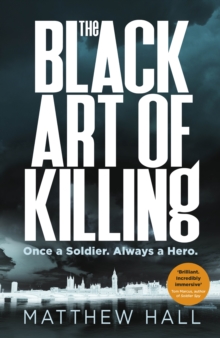 The Black Art of Killing Hardback

THE ACTION-PACKED THRILLER THAT FUSES BRAWN AND BRAINSOxford University has never employed a man like Leo Black before. Now an adored lecturer destined for tenure among the gleaming spires, Leo Black served the SAS for twenty years with distinction. When the friend he fought alongside is killed in Paris trying to prevent the abduction of a young British scientist, the world Leo has tried to put behind him begins to reel him back in. But as Leo gets closer to the startling truth about his friend's death, he faces a difficult decision. Forget the training, the loyalty, the service and be the man the university wants him to be . . . Or remember that not so long ago, he was a truly exceptional soldier. Praise for Matthew Hall'Breathlessly enjoyable' The Times'An edge-of-the-seat thriller . . . should come with a health warning' Irish Independent'Fasten your seatbelts for a quality thriller . . .' Independent on Sunday