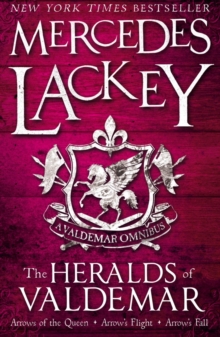 The Heralds of Valdemar : A Valdemar Omnibus Paperback / softback

Thirteen-year-old Talia longs for a better life, far away from her repressive stepmothers and the village of Sensholding, where books chronicling the adventures of the Heralds of Valdemar and their Companions provide her only escape.

But when her family decide she is to be married, Talia flees, and stumbles upon one of the very Companions of legend, a magical steed with incredible powers. Talia soon discovers she has powers of her own, and, together with her new Companion, she arrives at the Collegium to fulfil her dreams and train as a Herald.

But as Talia struggles to master her unique abilities, she unearths a deadly plot that could destroy both Queen and kingdom. The Heralds of Valdemar omnibus sees Talia grow from teenage runaway to a Herald whose powers will affect the future of the entire realm. "She'll keep you up long past your bedtime." Stephen King "Lackey's storytelling is impossible to resist." The British Fantasy Society "Lackey is a masterful writer...an excellent trilogy." Fantasy Faction "Lackey is a spellbinding storyteller who keeps your heart in your mouth as she spins her intricate webs of magical adventure." Rave Reviews