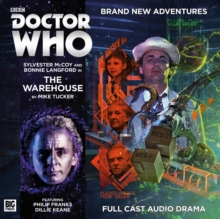 Part of the Doctor Who Main Range series

The Doctor and Mel land in what appears to be an orbiting warehouse, a delivery facility with a dangerously eratic computer.

Whilst Mel is helping with repairs, the Doctor begins to realise that not everything in the warehouse is as it seems.

Why do no goods ever seem to leave the shelves? Why are the staff so obsessed with the stocktake? And who is the mysterious Supervisor? On the planet below, the Doctor discovers that the computer might be the least of their problems - and that they should be more concerned with the spacestation's mould and vermin...Sylvester McCoy played the Doctor from 1987 to 1996, but is also familiar to modern cinema audiences as Radagast the Brown from Peter Jackson's The Hobbit movies.

Bonnie Langford played a companion to both the Sixth Doctor (Colin Baker) and Seven Doctor (Sylvester McCoy), and her subsequent career has included Chicago on stage, and Dancing on Ice.

Also in the Doctor Who Main Range series