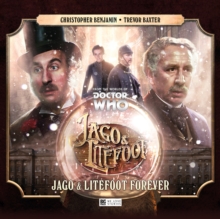 Where has Litefoot gone? Together with his friends Ellie, Quick, and Dr Betterman, Jago is on the trail of the missing professor and dear friend - and it will lead to one of the strangest cases in their infernal investigations. (Also contains both parts of Doctor Who - Short Trips: The Jago & Litefoot Revival, and a disc of interviews).

The final story in Big Finish's Doctor Who spin-off range which followed on from fan favourite story The Talons of Weng-Chiang, across 13 series of audio adventures set in a Victorian era beset by fiends and monsters!

The second disc contains both parts of Doctor Who - The Jago & Litefoot Revival, a thrilling reading from stars Christopher Benjamin and Trevor Baxter which tells of Jago & Litefoot meeting the Tenth and Eleventh Doctors.

The third disc documentary pays tribute to actor Trevor Baxter - George Litefoot - who died in 2017 and is much missed by the Big Finish family.