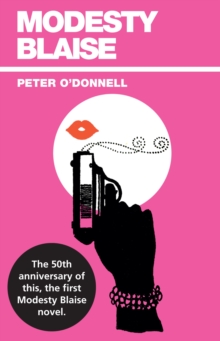 In her first adventure for British Intelligence Modesty Blaise with her loyal lieutenant, Willie Garvin, must foil a multi-million pound diamond heist.

Bored and restive, Modesty is looking for a mission when she is approached by the head of the British Intelligence.

Britain is shipping ten million pounds worth of diamonds from South Africa to Beirut as partial payment for an oil concession to a Middle Eastern sheikh and the rumour is that the secrecy of this mission has been uncovered and someone may try to steal it.

Modesty's knowledge and contacts within the international underworld make her the perfect person to solve the case.

Knowing the difficulty of the mission, she first has to save Willie from captivity in South America.

Then they travel from London to the South of France, across the Mediterranean to Cairo before battling, against impossible odds, a private army of professional killers.