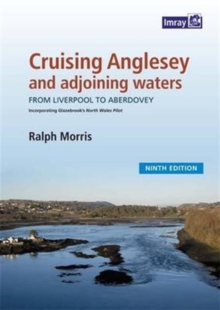 Ralph Morris's guide to the island of Anglesey and coast from Liverpool to Pwllheli was first published over 20 years ago and has always been closely associated with the North West Venturers Yacht Club based in Beaumaris.

This fully updated new edition is presented in the same format as previous ones but now uses full colour charts and photographs.* Coverage has been extended to include Porthmadog* Google Earth aerial images have been produced for every anchorage* The Tidal information has been reviewed and a new Tidal Atlas for Bardsey Sound has been included* 'Easy Find' tabs have been introduced for each sectionIn the 1960s, Ralph Morris learned his way around Anglesey the hard way - in a day boat with one chart and a compass which one day chose to fail in fog. That's not what prompted the decision to write this pilot though.

It was the increasing scarcity of Henry Glazebrook's Anglesey & North Wales Coast Pilot.

A couple of members of the North West Venturers Yacht Club had written Cruising Notes for about half the coastline and after twenty years pottering around the Irish Sea it seemed like a good idea to complete the circuit and incorporate Henry's pilot.In the early years, club members backed and published the pilot with all the material (including the illustrations). The North West Venturers Yacht Club celebrated its 50th anniversary in 2011.

Formed as a means of creating somewhere to sleep when it was too rough to camp onboard 18 footers in Beaumaris Bay, the club has prospered steadily.

For its first 40 years, a majority of members came from the industrial communities of Liverpool and Manchester.

Many of these have now emigrated to Anglesey and retirement.

It remains steadfastly a family club with a galley and lounge, but no bar.

Visiting yachtsmen are always welcomed.This 9th edition has been revised for 2016.