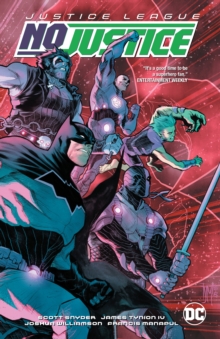 Out of the ashes of Dark Nights: Metal, new Justice League and Teen Titans teams are born from the events of Scott Snyder's Justice League: No Justice!

The cataclysmic events of Dark Nights: Metal has seen the universe's balance of power snap.

Brainiac arrives on Earth with a dire warning for the Justice League: there's a threat coming to destroy Earth, one that the heroes are ill-equipped to handle.

But the combined forces of Justice League, the Justice League of America, the Titans, Teen Titans and... the villains of the DCU certainly don't think so. Splitting into different squads, including Batman, Lobo, Wonder Woman, Cyborg, Deathstroke, Superman, The Flash, Harley Quinn, Robin and more, these new Leagues must stop one of their gravest threats ever.

Written by Scott Snyder, Joshua Williamson (The Flash) and James Tynion IV (Detective Comics) with sublime art by Francis Manapul (Trinity), Justice League: No Justice sets up the status quo of Justice League, Titans and more for years to come!