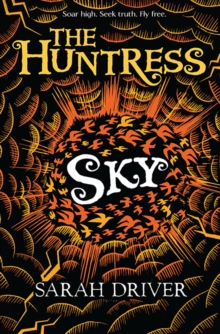 Part of the The Huntress Trilogy series

'Driver's prose takes flight in Huntress: Sky. Exhilarating, gripping and full of heart' Kiran Millwood Hargrave, author of The Girl of Ink and Stars. The second book in a stunning new fantasy adventure trilogy, perfect for readers aged 9+ and fans of Philip Pullman, Piers Torday, Abi Elphinstone, Katherine Rundell and Frances Hardinge. Seek the scattered Storm-Opals of Sea, Sky and Land, before an enemy finds them and uses them to wield dark power . . . The trail of the Storm-Opals takes Mouse further than she has ever been before.

With her little brother Sparrow and friend Crow alongside her, she stumbles into the world of Sky, where fortresses are hidden amongst the clouds, secret libraries (skybraries) nestle atop gigantic icebergs and the sky swirls with warring tribes and their ferocious flying beasts.

Can they solve Da's message before it's too late for their ship, their tribe and the whole of Trianukka?Sky-soaring, beast-chattering, dream-dancing, draggle-riding, terrodyl-flying, world-saving adventure. Praise for Sea, the first book in The Huntress Trilogy:'Moonsprites.

Paver meets Pullman. A real gem' - Abi Elphinstone, author of The Dreamsnatcher and The Shadow Keeper'A glorious world, a wild adventure and a fierce heroine.

I can't stop thinking about this book!' - Robin Stevens, author of Murder Most UnladylikeIf you like Northern Lights, The Lie Tree, The Girl of Ink and Stars and Rooftoppers, you'll love The Huntress Trilogy. Sarah Driver is a graduate of the Bath Spa MA in Writing for Young People, during which she won the United Agents Most Promising Writer prize in 2014. She is also a qualified nurse and midwife. Sarah started writing stories as a small child and lists her influences as Spellhorn by Berlie Doherty, A Necklace Of Raindrops by Joan Aiken and the Carbonel books by Barbara Sleigh - those gorgeous, magical stories that create and nurture readers. When she's not writing, she can be found walking by the sea, visiting exhibitions, reading or travelling, often in the name of research.

She has seen humpback whales from an oak boat in the northern seas of Iceland, eaten cubes of six-month fermented Greenland shark, and journeyed by train beyond the arctic circle to the far north of Swedish Lapland, where she rode a slightly obstinate horse through a forest, under the northern lights, in temperatures of -32 degrees.

She has learned that even horrifying bouts of sea-sickness make excellent research material. Sky is the second book in Sarah's debut series, The Huntress trilogy.

Sarah lives in Sussex, close to the sea, with Lily, a street-wise ginger cat and an excitable mini-lop bunny named Peter.

Also in the The Huntress Trilogy series