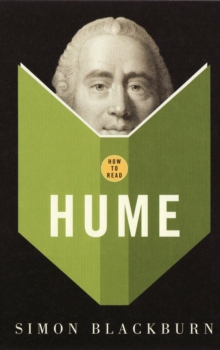 How To Read Hume Paperback / softback

Part of the How to Read series

'Be a philosopher; but, amidst all your philosophy, be still a man.' David HumeDavid Hume is generally recognized as the United Kingdom's greatest philosopher, as well as a notable historian and essayist and a central figure of the Enlightenment.

Yet his work is delicately poised between scepticism and naturalism, between despair at the limited powers of the mind and optimism at the progress we can make by understanding it.

This difficult balancing act has given rise to a multitude of different interpretations: reading Hume has never been free of controversy.

In this new approach to his writings, Simon Blackburn describes how Hume can be considered one of the earliest, and most successful, evolutionary psychologists, weaving plausible natural accounts of the way we should think of ourselves and of how we have come to be what we are.

The Oxford Dictionary of Philosophy
Simon Blackburn
£6.49 Save £3.50

Also in the How to Read series