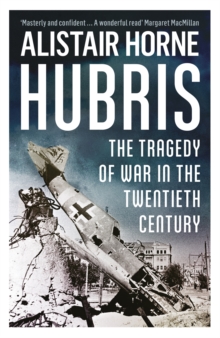 Hubris : The Tragedy of War in the Twentieth Century Paperback / softback

Alistair Horne has been a close observer of war and history for more than fifty years.

In this wise and masterly work, he revisits six battles that changed the course of the twentieth century and reveals the one trait that links them all: hubris.

From the Battle of Tsushima in the Russo-Japanese War of 1905 to Hitler's 1941 bid to capture Moscow, and from the disastrous American advance in Korea to the French surrender at Dien Bien Phu, Horne shows how each of these battles was won or lost due to excessive hubris on one side or the other. A dramatic, colourful and stylishly written history, HUBRIS is an essential reflection on war from a master of his field.