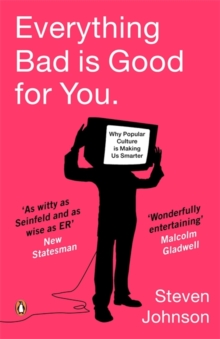 Everything Bad is Good for You : How Popular Culture is Making Us Smarter Paperback / softback

We're constantly being told that popular culture is just mindless entertainment - but, as Steven Johnson shows in Everything Bad is Good for You, it's actually making us more intelligent. Steven Johnson puts forward a radical alternative to the endless complaints about reality TV, throwaway movies and violent video games.

He shows that mass culture - The Simpsons, Desperate Housewives, The Apprentice, The Sopranos, Grand Theft Auto - is actually more sophisticated and challenging than ever before. When we focus on what our minds have to do to process its complex, multilayered messages, it becomes clear that it's not dumbing us down - but smartening us up. 'As witty as Seinfeld and as wise as ER' New Statesman 'Wonderfully entertaining' Malcolm Gladwell 'A vital, lucid exploration of the contemporary mediascape' Time Out 'A guru for Generation Xbox' Financial Times 'A must-read' Mark Thompson, former Director-General of the BBC Steven Johnson is the bestselling author of Mind Wide Open, Where Good Ideas Come From, and Emergence: The Connected Lives Of Ants, Brains, Cities and Software, named as one of the best books of 2001 by Esquire, The Village Voice, Amazon.com, and Discover Magazine, and a finalist for the Helen Bernstein Award for Excellence in Journalism.