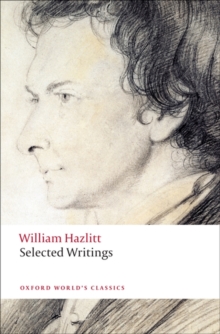 William Hazlitt (1778-1830) developed a variety of identities as a writer: essayist, philosopher, critic of literature, drama, and painting, biographer, political commentator, and polemicist.

What unites this variety is his dramatic and passionate intelligence, his unswerving commitment to individual and political liberty, and his courageous opposition to established political and cultural power.

Hailed in 1819 as `one of the ablest and most eloquent critics of ournation', Hazlitt was also reviled for his political radicalism by the conservative press of the period.

His writing engages with many of the important cultural and political debates of a revolutionary period, and retains its power both to provoke and move the reader.

The Fight and Other Writings
William Hazlitt
£2.99