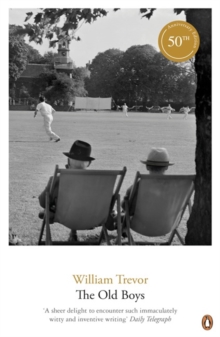 The Old Boys by William Trevor - a novel of power, revenge, love and the failure of love from one of the world's best writersA group of septuagenarians revive schoolboy conflicts in the election of the President of the Old Boys Association.

Jaraby expects to get the job, but he reckons without the bitterness of Nox, who still remembers the humiliations of his school years. And when Jaraby's son gets into trouble with the law, Nox has the perfect stick with which to beat him. Their powers may be failing but the old boys possess a fierce understanding of the things in life that matter - power, revenge, hatred, love, and the failure of love. The Old Boys was William Trevor's acclaimed first novel.

It will be enjoyed by fans of The Story of Lucy Gault and Felicia's Journey, as well as readers of Colm Toibin and William Boyd. 'Uncommonly well-written, gruesome , funny and original' Evelyn Waugh'Immaculately witty and inventive writing' Daily TelegraphWilliam Trevor was born in Mitchelstown, County Cork, in 1928, and was educated at Trinity College, Dublin.

He has lived in England for many years. The author of numerous acclaimed collections of short stories and novels, he has won many awards including the Whitbread Book of the Year, The James Tait Black Memorial Prize and the Sunday Times Award for Literary Excellence.

He has been shortlisted three times for the Booker Prize: in 1976 with his novel The Children of Dynmouth, in 1991 with Reading Turgenev and in 2002 with The Story of Lucy Gault.

He recently received the prestigious David Cohen Literature Prize in recognition of a lifetime's literary achievement.